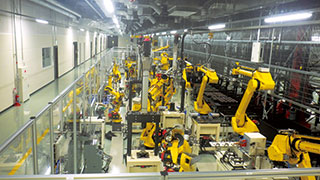 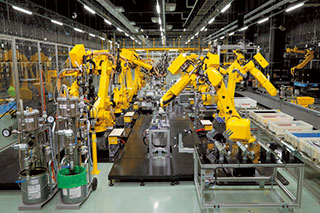 The Laser Factory has a capacity to produce 80 CO2 lasers per month.
In this factory, automatic test systems controlled by FANUC CNCs ensure high-quality production. 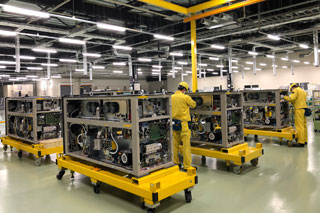 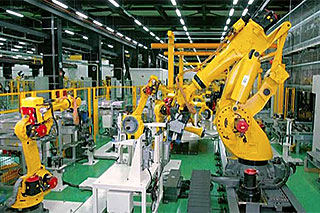 The ROBOT Factory in Headquarters has a capacity to produce 6,000 units per month, while the Tsukuba Factory can produce 1,000 units per month. (To be increased to a maximum capacity of 11,000 units per month combined.)
ROBOTs are manufactured in automated assembly systems, where a large number of FANUC ROBOTs are used to make ROBOTs. The newly made ROBOTs then undergo automatic testing and inspection, along with continuous operation before shipment.

The Tsukuba ROBODRILL Factory has a capacity to produce 3,000 ROBODRILLs and DDRs (1 axis rotary table) per month. (DDRs are manufactured at Headquarters.)
Units such as tool changers are assembled automatically by robots.
Many collaborative robots are actively used to assemble spindles alongside human workers.

Production of 400 ROBOSHOTs per month is possible. (To be increased to a maximum of 600 units per month.)
Heavy parts are assembled jointly by workers and collaborative robots.
After the assembly of a ROBOSHOT is completed, it is connected by LAN to a host computer, after which the data is set and test data is collected automatically. 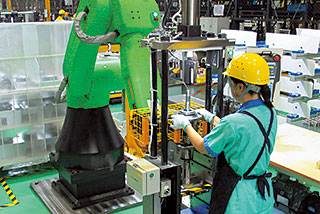 Assembly of a unit by a worker
and collaborative robot 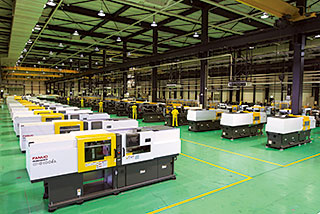 Production of 100 ROBOCUTs per month is possible. (To be increased to a maximum of 150 units per month.)
Heavy parts are assembled jointly by workers and collaborative robots.
By connecting to the host computer via LAN, data transmission and process management, along with conveying work instructions, can be performed efficiently.

Parts for ROBOTs, ROBODRILLs, ROBOSHOTs, ROBOCUTs and laser oscillators are machined in these factories. With the installation of FANUC ROBOT Cells, they operate unmanned for long hours.

Parts for MOTORs are manufactured with CNC lathes. The workpieces are supplied to machining cells by an automated warehouse, then loaded and unloaded by ROBOTs automatically.

Pressed parts for motors are produced here. Robots are used to automatically take out, inspect, and measure pressed parts.

Die cast parts for MOTORs are manufactured in this factory. ROBOTs are used throughout the process, performing casting, unloading, bending and deburring.

ROBOSHOTs are used to produce plastic parts for CNCs, SERVO MOTORs and SERVO AMPLIFIERs.The molding status is constantly monitored and recorded via a network. 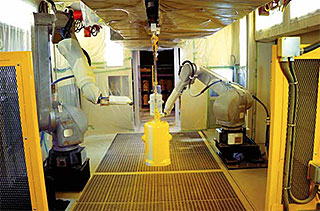 The parts for MOTORs, ROBOTs and ROBOSHOTs are painted by FANUC Paint ROBOTs. Even the masking process is automated with FANUC intelligent ROBOTs.